The composition and characteristics of the Opal Welo of Ethiopia

TheOpale Welois mainly composed of Silice and dwater. Generally white to translucent (sometimes yellowish to brown), it is characterized by its multiple color games (opalescence).

The Pale Welo is often hydrophane. Indeed, when it is immersed in water it can become completely translucent to then regain its initial appearance by drying (the drying process should not be accelerated; it can take several days/weeks).

The hardness of Opales Welo is between 5.5 and 6.5 on the Mohs scale and its density is 1.9 to 2.5. It's a stone that can easily scratch. It is best to avoid, among other things, thermal shocks, chemicals (Soap, perfume.) and prolonged exposure to sun or heat source (lamp, heating.) in order to preserve its colour lamps.

Or do we find the Pale Welo?

The deposits are located in the mountains Semien Wollo, northwest of theEthiopia to more 2500 meters altitude. The Welo Opales formed in silica veins only a few meters from the surface.

Some claim that the Opales Welo were already in the Nairobi markets in 1993 but their discovery is officially attributed to geologist Telahun Yahannes and engineer N. Barot in 1994.

It’s only later 2008 that mining and commercial exploitation has really begun. It is this same year that the Ethiopian Pale appeared at the international fair of gems and minerals of Sainte-Marie-aux-Mines Alsace. She then becomes a gemstone very coveted by collectors, creators and the general public.

Symbolic and virtues of the Pale Welo in lithotherapy 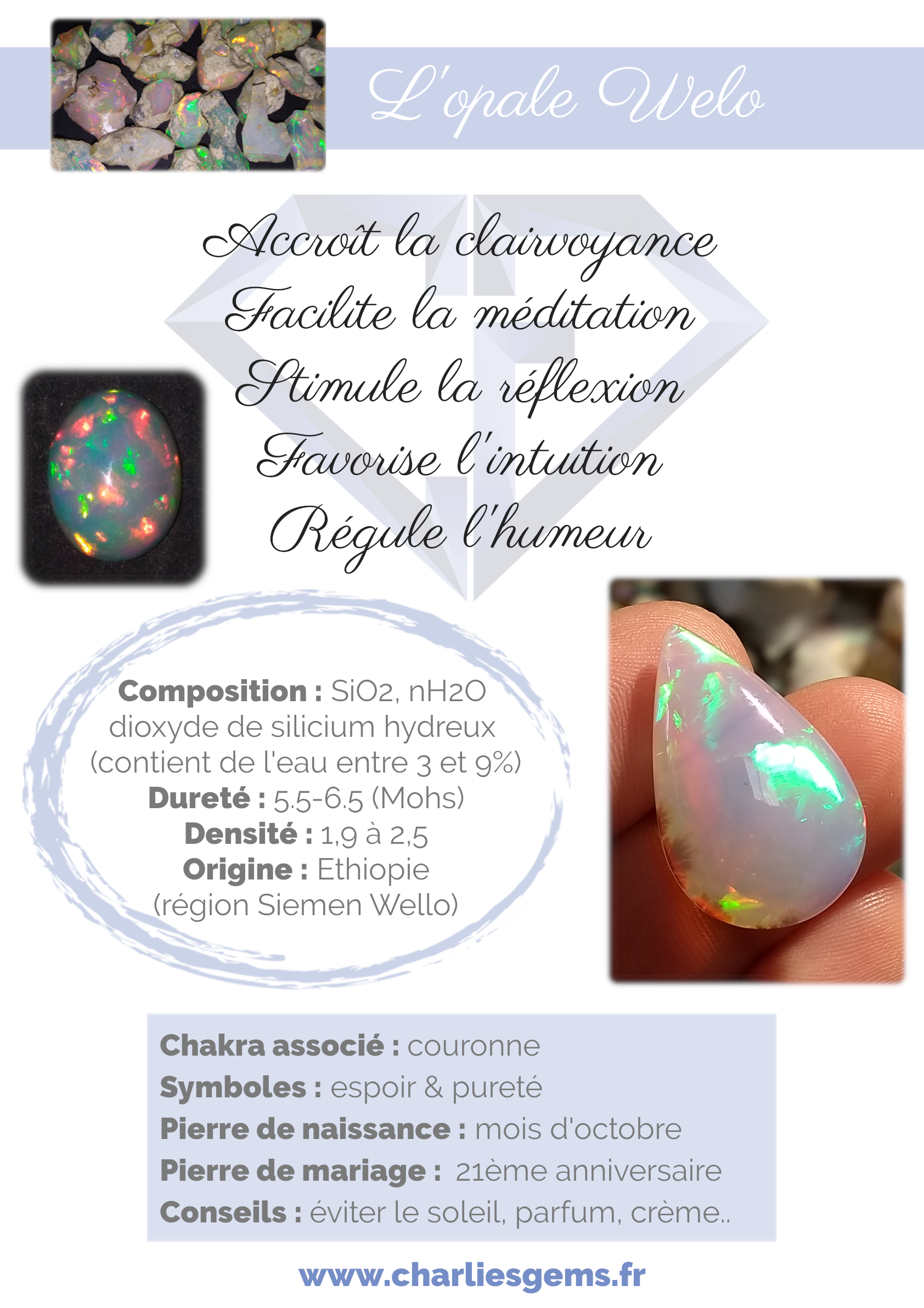 The Opal is the stone associated with the month ofOctober and 21st wedding anniversary. Symbol of purity, hope and ease, it is related to chakra crown.

It’s a protection stonethat many use to facilitate meditationregulate the mood and stimulate the creativity. According to beliefs, it increases clairvoyance and promotesintuition and reflection.

Here is a table repertorianting the different recharging and purification methods stones:click here

Before choosing, think about how to find out chemical composition and characteristics Your stones. Indeed, some of them, like the Pale Welo,do not support contact with water, salt or sun.

Posted in : Lithotherapy, The Gemmes