The formation of the Tiger Eye

L’Tiger Eye means a variety of Quartz from the phenomenon of pseudomorphosis. This term refers to the partial or total transformation of one mineral into another. Its chemical composition changes but its original form is retained.

In the case of the Tiger Eye, the Silice (Quartz) came to infiltrate gradually between them parallel fibres of a type ofblue ass, also called Crocidolite. It is a mineral composed mainly of iron, magnesium and sodium.

Over time, the Crocidolite turned into Quartz while keeping its original fibrous structure. The chatoyance and silky reflections of the Tiger Eye are due to these “cHeveuxrights and organized.

Despite them dissolution during the process, there are still traces of iron oxides which rate will determine color Final.

Characteristics and deposits of the Tiger Eye

Chemical formula SiO2, the Tiger Eye has a hardness of 7 on the Mohs scale and a variation density 2.58 to 2.66. It draws its name from its golden color reminding that of the eye of the feline.

The Tiger Eye is prospecting mainly in South Africa, in Australia, Mexico, Sri Lanka, or in Austria. We also find it at Brazil, in Burma, in India and United States For example. 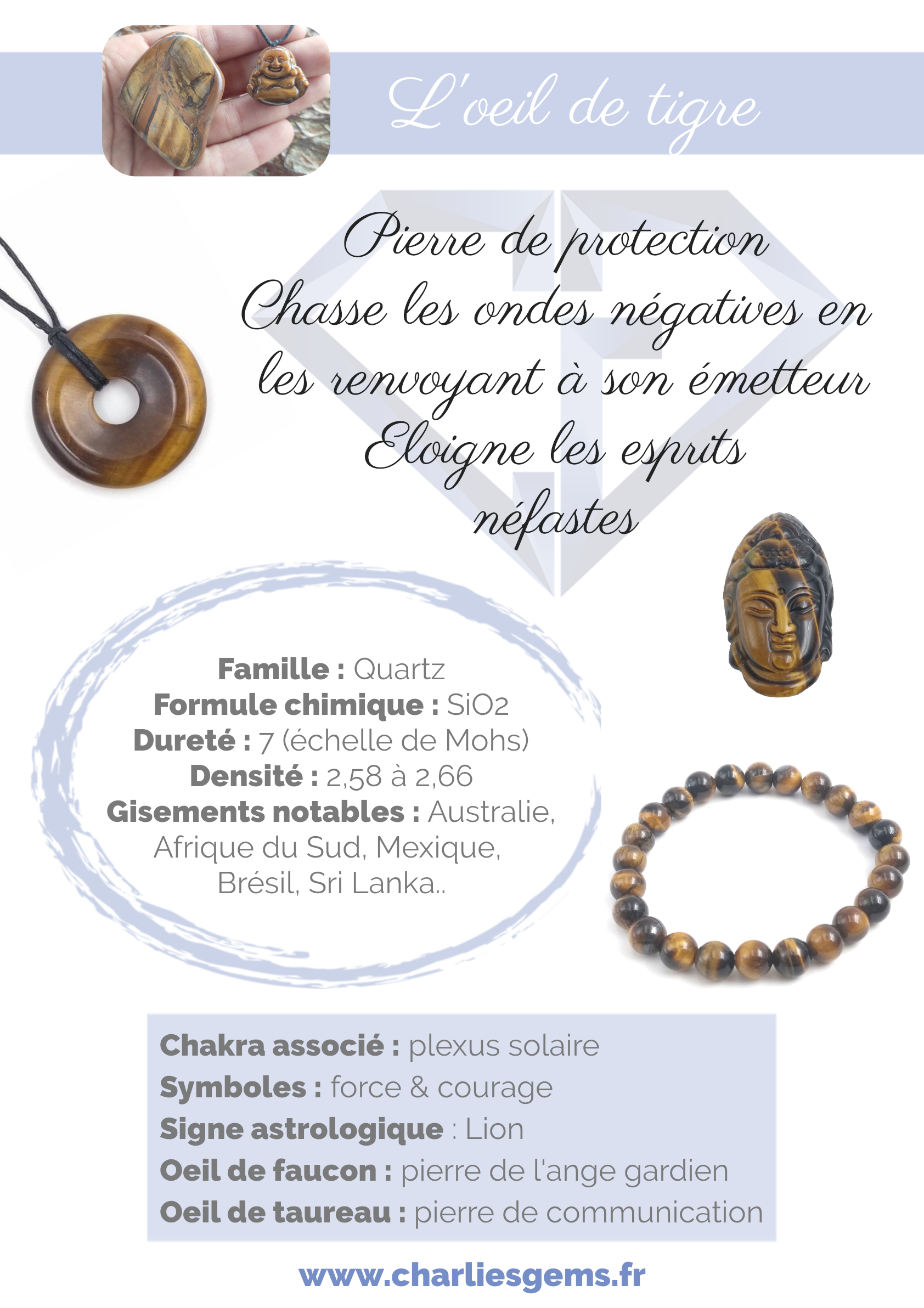 ♪ lith therapy, the Tiger Eye is considered a protection stone powerful capable of hunting negative waves by sending them directly to its transmitter.

It is used for Keep the wrong eye away, evil spirits and dangers. Some people have the Tiger Eye at the entrance of their home to prevent the evil spirits from entering and protecting the inhabitants.

According to the testimonies, it is a stone that would promote motivation, will, and perseverance.

Partner solar plexus chakra and the astrological sign of Lion, it represents force and courage.

These three minerals have chemical composition (SiO2) but trees different colors on the basis of Chemicals that they contain and contain thermal conditions during their training.

•L’Tiger Eye holds its golden color of its high rate of iron oxides.

•L’Eye of faucon has kept its original blue shades as its inclusions have not been oxidized by iron as the Tiger Eye.

•L’Eye of bull is a tiger Eye with dark red shades that have been warmer during training, or artificial thermal treatment.

Symbolically, the Falcon Eye (blue) is the stone of the guardian angel and the Eye of Taurus (red) is a communication stone.

Here is a table repertorianting the different recharging and purification methods minerals:click here

Before choosing, think about how to find out chemical composition and characteristics Your stones. Indeed, some of them do not support contact with water, salt or sun, for example.

Request safe methods such aslunar energy, one Cristal geode or even form waves.