Opals of Australia, discover the different types of Opals and the Australian deposits

The different Opal deposits in Australia

The quality and quantity of Opals available on the Australian continent make it the world's largest producer for over a century. In July 1993, Opal was proclaimed Australia's "national gem". Mainly sedimentaryAustralian Opal has the reputation of being the most stable and valuable on the market.

From Coober Pedy White Opals at Lightning Ridge Black Opals through the Queensland Boulder OpalsAustralia has the greatest diversity of Opals and the most famous deposits in the world. 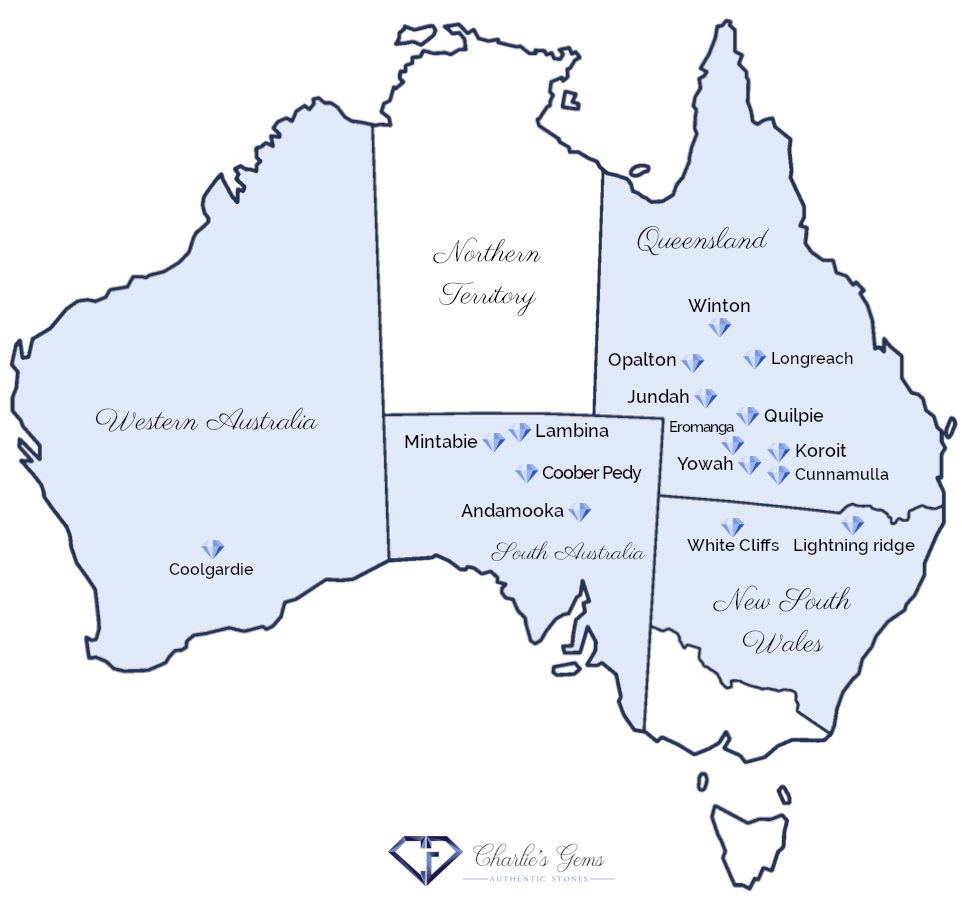 Map of the most famous Opal deposits in Australia | Image credit: ©Charlie's Gems

Boulder Opal is found exclusively in the state of Queensland, in the North East of Australia. They are veins of Opal (silica) formed in the cracks and cavities of a iron matrix (iron-rich sedimentary rock). It is nicknamed "The Stone of the Aborigines", in reference to its unique landscapes reminiscent of Aboriginal Art. 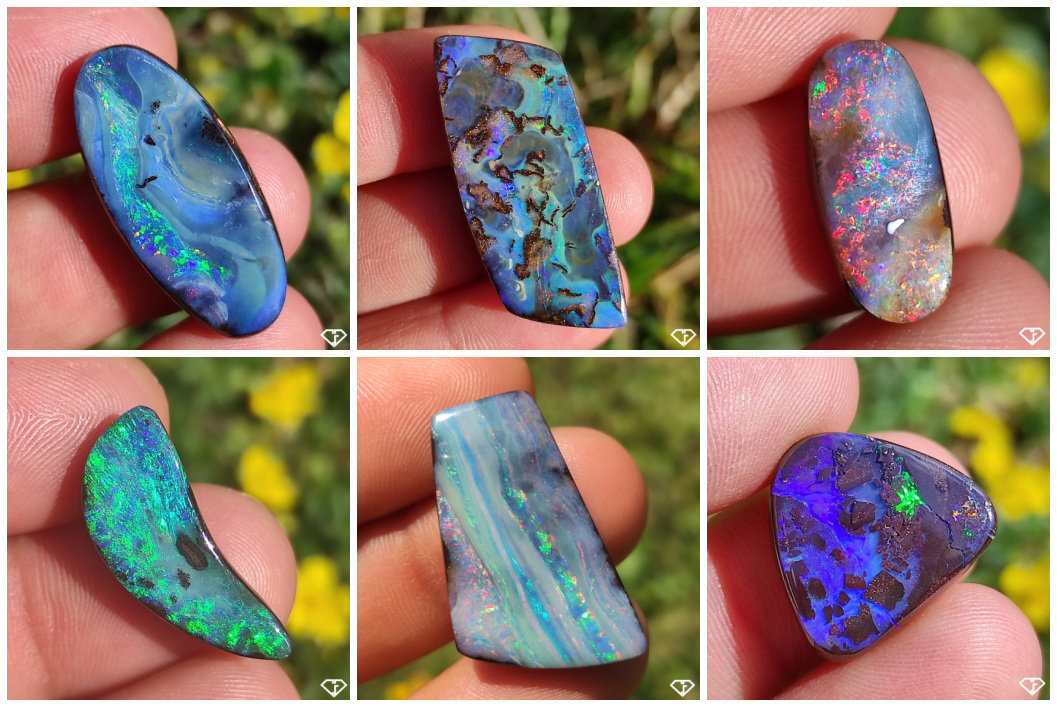 The Queensland Opal fields extend for several hundred kilometres from Winton to Yowah. This area is called the "Winton Formation". The conditions of extraction are difficult because of the heat and the great dryness.

Here is a list of Queensland's famous Opal fields: 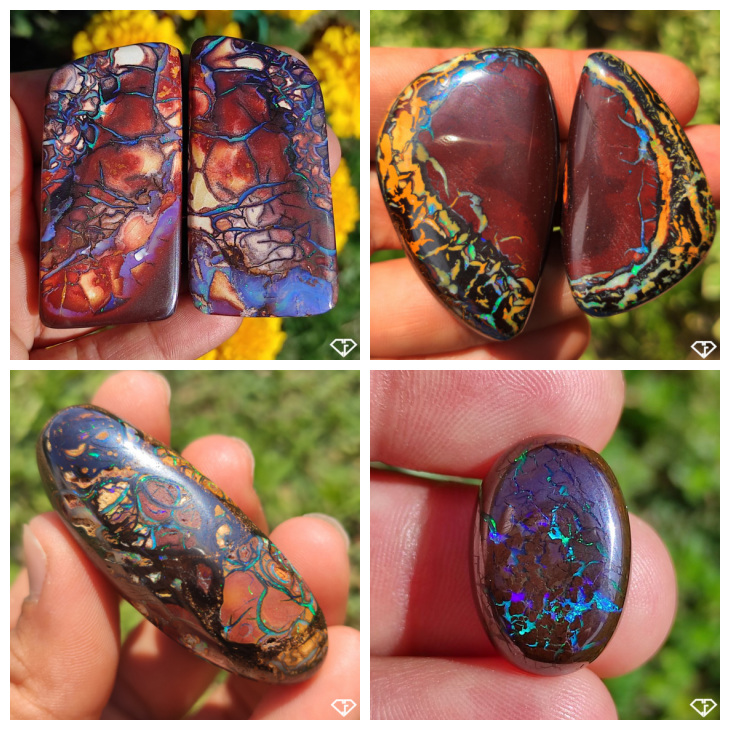 Other examples include Longreach,Kyabra-Eromonga,cunnamulla,bulgarooortoompineamong the most productive fields of the state of the queensland.

the opals of the south australia

the opals of coober pedy

coober pedy is a city located in the southern desert of Australia, halfway between adelaide and alice Springs. The first opal was discovered in 1915 by Willie hutchinson, a 14-year-old teenager whose father was part of a group of gold prospectors (new colorado prospecting syndicate). the field of Pale, initially known as "Stuart range opal field", was exploited shortly afterwards. Aborigines renamed him “Coober Pedy” in 1920, which can be translated into “white man in a hole”. this appellation refers to the dozens of white men who arrived on site to dig the mines of Pales and their homes. Indeed the unsustainable heat forced them to build their houses under the earth (troglodyte dwellings). tourists passing to coober pedy can visit the manyunderground facilities(church, shops, hotels, bars). andunderground minesto admire the beautiful walls of Opales.

the beautifulwhite milky opalsof coober pedy prospect in depth in the layers of sandy clay deposited by the shallow sea that covered the territory 100 million years ago (Cretace era).

extraction conditions are extremely difficult and costly and the use of explosives is inevitable due to the hardness of the rock. Thousands of holes have been dug over hundreds of square kilometres and mounds of land are visible to loss of sight. 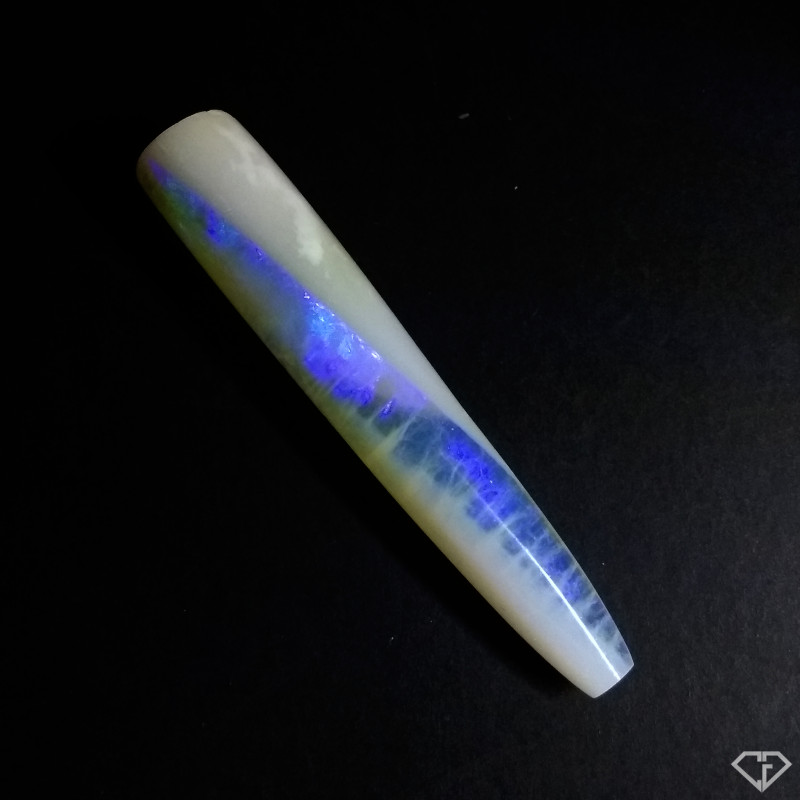 ♪Belarusaremarine cephalopodshaving lived up to the Cretaceous era 100 million years ago (an ancestor of the seiche). therostremeans the inner bone of the belemnite in the form of a “gun ball”.

These shellfish lived at the time in the old sea that covered the area or is coober pedy, in southern France. When the sea turned back, the shells buried in the layers of sandy clay. Only 20-30 million years ago, the pressure and variation of the napples led to the deposition of Palae while fossils were covered by silica saturated liquids. 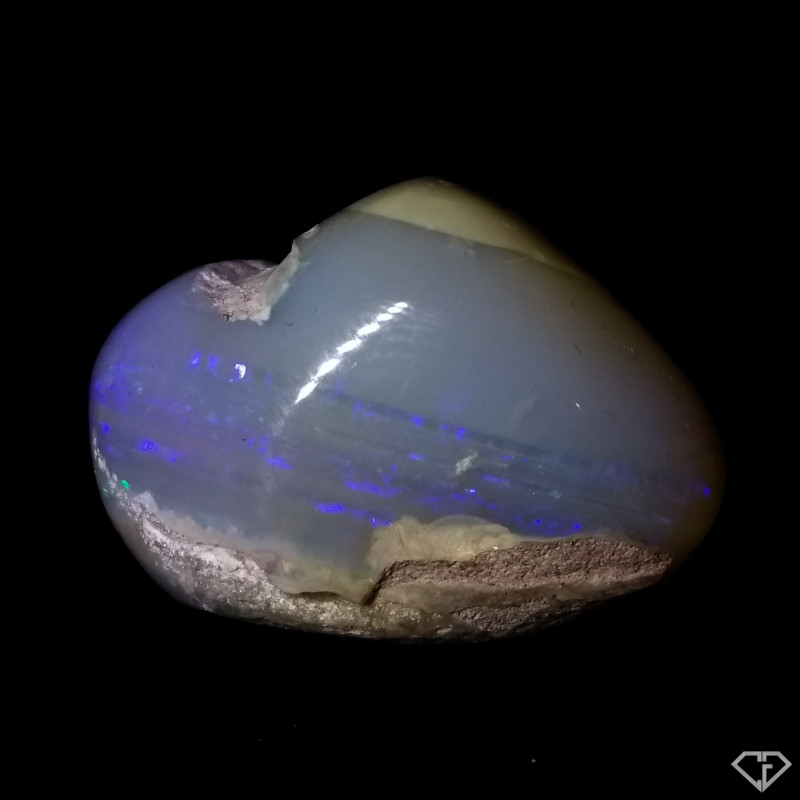 process of Palizing a pedy coober shell in australia:

Andamooka deposit is located in the south australia desert at 480km of coober pedy. Andamooka’s opals are appreciated for their color lights and the size of the specimens, which in particular make sculptures.

most of Andamooka’s opals are porous and suffer fromtreatmentwith sulphuric acid and sugar to fill the cavities and imitate black opals. they are easily distinguished by their low density and black tasks.

opals found in mintabia can be white, crystal, dark or black, without matrix. the hardness of the rock makes prospecting very difficult. the field of Pales delambina, located 90km from mintabia, was exploited during the decline of mintabia deposit.

the opals of the new south wales

discovered in 1905 by kangaroo hunters, the Black Pale of lightning ridge is one of the most rare and expensive opals on the market. its coloured lights, its patterns and its grey to black body make it an exceptional opal. 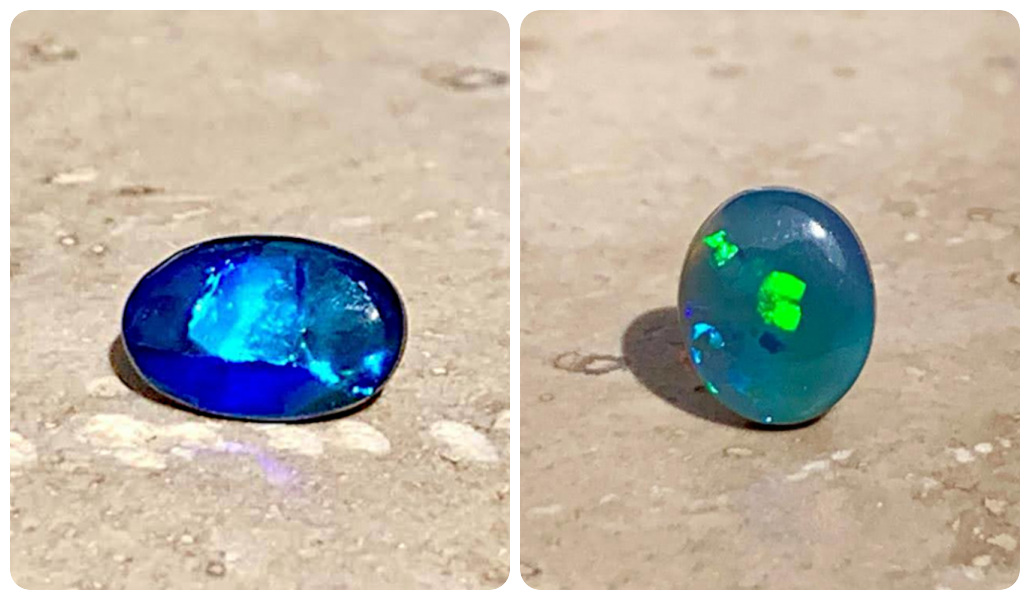 Transparent to opaque, Black Opal owes the dark color of its base (potch) to the presence of carbon andiron oxide. The term Potch refers to a Common Opalwith no colors. Lightning Ridge Opals are not considered Black Opals.

When it is transparent it is called Opal crystal because the body is dark despite the absence of a black base. 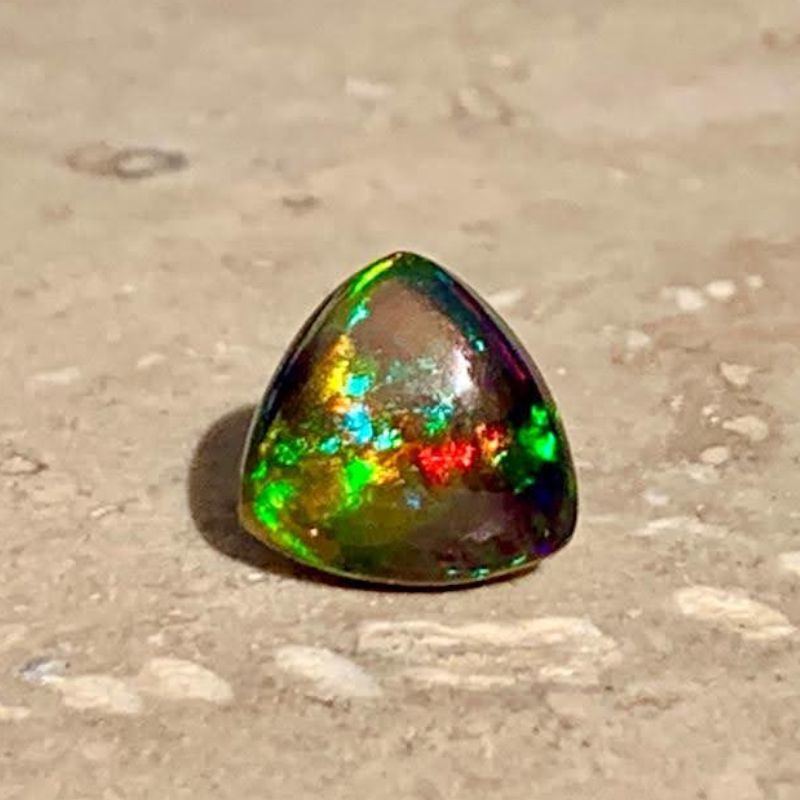 The quality and price of a Lightning Ridge Black Opal is determined by 4 main criteria:

The deposit produces less and less each year, which explains the constant rise in prices for quality parts.

Opal prospecting in the White Cliffs area began in 1890. This is the only place where the famous "Pineapple Opals" or "Pineapple Opals"These are highly sought after by collectors because of their rarity. It is in fact a pseudomorphosis Glauberite (calcium and sodium sulphate) or Ikaite (calcium carbonate) crystals aggregates have been replaced by Calcite and then by Opal. There are also some specimens of fossil woodsandopalized shellsof good quality.

the fire opals of the Western Australia

williams opal mine(three mile hill mine) is a recently discovered Opale deposit in the area ofcoolIn the Western Australia. This is the only deposit of Pale in this vast state of 2.646 million km2. Originalvolcanic, it has golden yellow colours with oranges similar to Mexican opals. its brilliance and hardness allow it to be sized in facets. it is prospected only a few dozen centimetres from the surface. The Australian Fire Opal was presented in 2014 at the International Tucson Minerals Fair in Arizona.

the price of Australian opals

the criteria that determine the price of an opal

the value of an opal is determined according to several criteria: 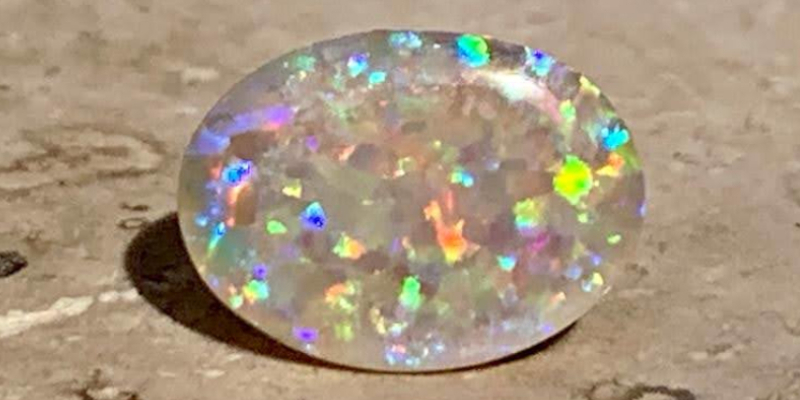 other factors that influence the price of opals

other factors also contribute to the increase in the price of malaria:

the price also varies depending on the supply and demand. when the supply is low and the demand continues to increase, as is the case with the pandemic in particular, then the price increases.

the regulations of the australia opal prospecting

Opal’s prospecting is a highly regulated activity in australia. minors and prospectors must be provided withlicencethe cost, period of validity and modalities differ in each state. The exploitation of certain deposits requiresauthoritiesspecific orpurchase of a concessionfor a specified period. Other fields are free to access with or without a license, provided you use manual tools and no machine. it is also sometimes possible to look for fragments of opals on the old concessions now public. concerning explosives,restrictionshave recently been established to regulate and reduce this practice.

the treatments, doublets and triplets of Pales

What treatments can Australian opals be treated?

in some cases opal cracks are combined withresin,siliconeor sometimes withoilbut this method is only temporarily effective.

Charlie’s gems offers only natural opals, without collage or treatment.

What is a doublet and a triplet of Pale?

thedoubletmeans a piece of Opal stuck on a dark base or a piece of natural rock (2 layers.) 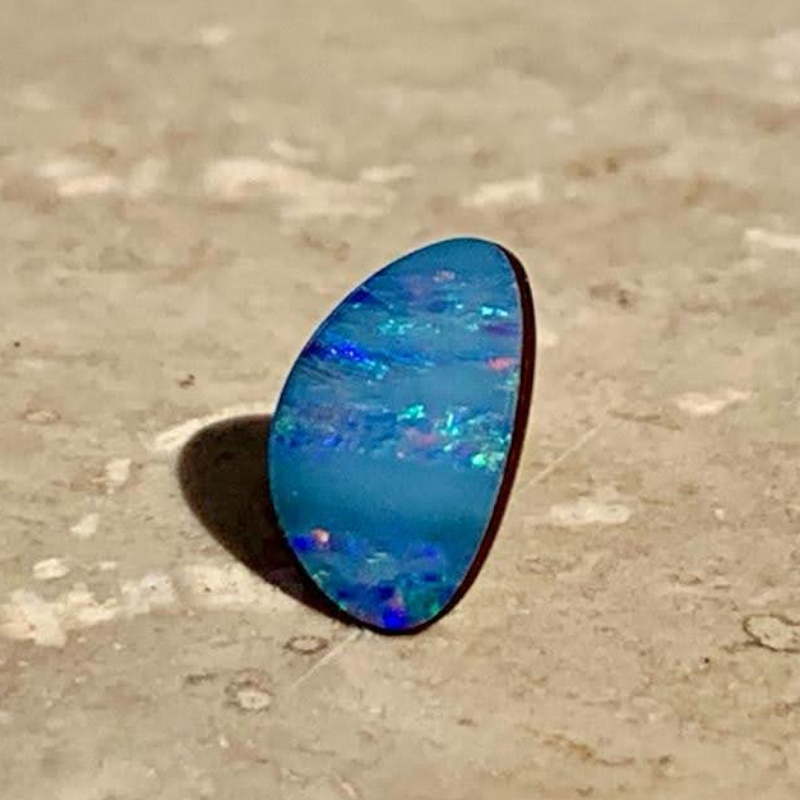 onetripletmeans a piece of Opal glued on a dark base to which a quartz cap or dome-shaped resin is added on the top (3 layers. ) 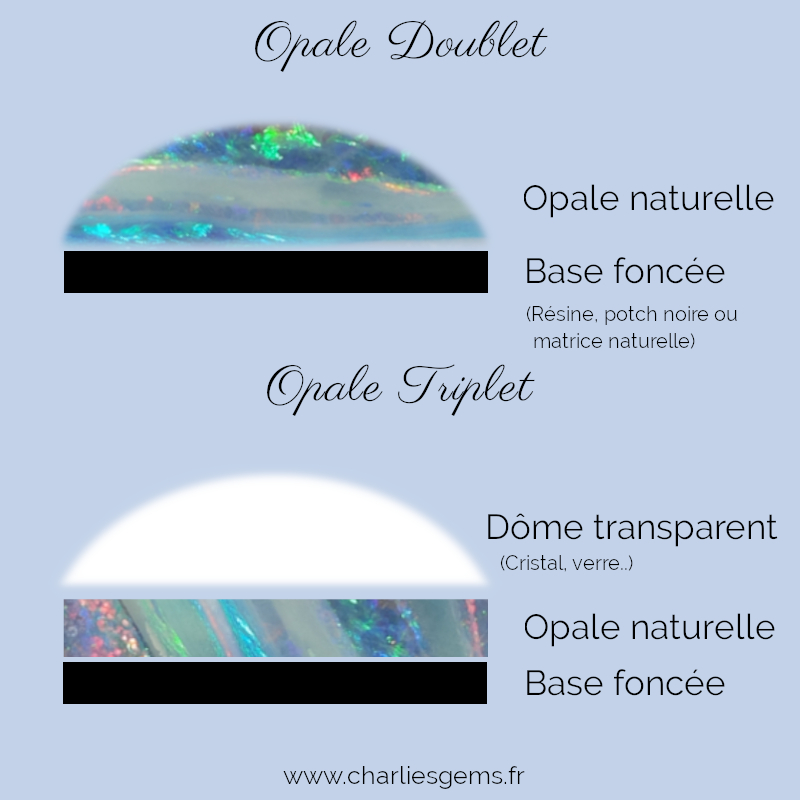 These collage methods allow to market small fragments of Opals too thin, too fragile or invendable in the state. The aim is to protect the thin layer of Opal while accentuating the colour lamps. opals from these processes are so-called composite stones. certain doublets or triplets are so well realized that it is difficult to detect it with the naked eye, so you have to remain vigilant and ask the seller in case of doubt.

broadcast in more than 100 countries, this program launched in February 2018 enabled millions of people to discover Australian opals and mining conditions. the principle of the program is to follow the adventures of 6 teams of prospectors in the most famous fields:coober pedy, Lightning Ridge, Opalton,yowah,white cliffsormintabia. The team “The fire crew” has helped to bring the Australia Western Fire Opal to the public. 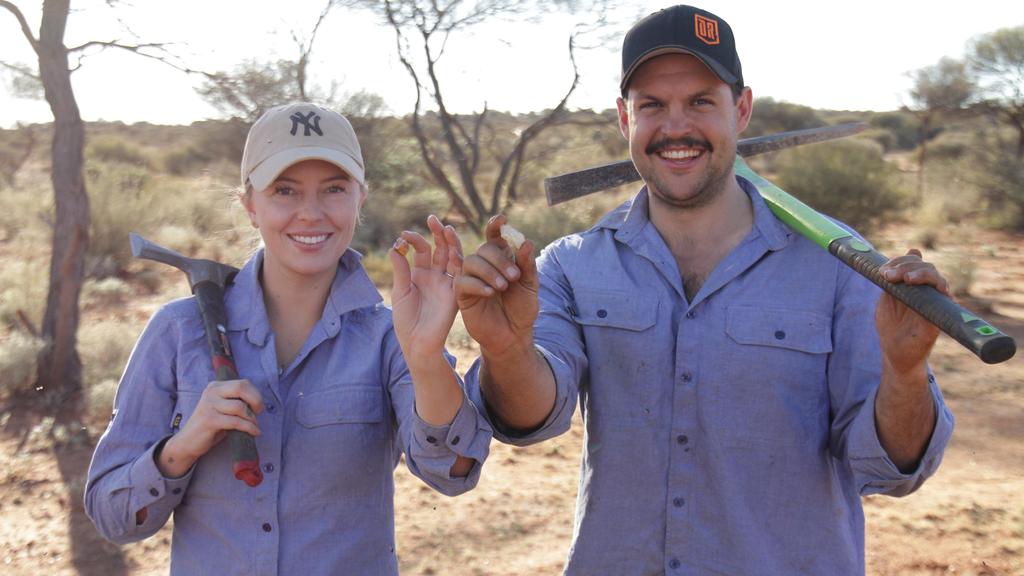 symbolic, legends and virtues of the Palestinian

the symbol of the Palestinian

The Opal is the stone associated withmonth of Octoberand21st wedding anniversary. it symbolizes light, harmony. purity, hope and luck.

legends and myths around the Pale

the opal, a sacred stone

The Pale is a sacred stone in the eyes ofaborigines, who think that the Pale was created during the visit of the divinity at the origin of their incarnation. according to their legend she descended on earth in the form of a rainbow, and transformed the rocks into shining opals. the aborigines nickname the Palae "Archi-en-ciel snake".

On the contrary, some believe that Opal jinxparticularly since the publication of Walter Scott's novel entitled Anne of Geierstein in 1829. In this story the princess wore an opal in her hair that changed colour according to her mood. When holy water touched the stone, it turned black and the princess fainted before turning to ash. The publication of this novel caused Opal's sales to drop by half for a time.

The diamond sellers also contributed to maintain this legend of "the cursed Opal" at the beginning of the last century. Indeed the Opals gaining in popularity, the diamond dealers were afraid that the Diamonds were devalued or forsaken in favour of the Opals. They then spread the rumor that a cracked Opal would bring bad luck.

The virtues of Opal in lithotherapy

Related to the crown chakraOpal is considered to be a protective stone which facilitates the meditationIt regulates moods and stimulates creativity. According to beliefs, it develops intuition and the clairvoyance and promotes connections with spiritual beings and the subtle planes.

The different types of Opals in the World

An article on the Opals of the World is in progress.

Posted in : The Gemmes