Stones of the world

Origin and origin of our stones

From antiquity to today, gems and minerals of four corners of the world have always fascinated civilizations both for their beauty and for their rare or their virtuesFor millennia, peoples Mayas, Indian, Chinese, Egypt and so many others carve, size, collection and use minerals and crystals for religious, spiritual, medicinal, aesthetic or decorative purposes.

The planet is full of fabulous stone deposits, discover where our gems and minerals come from. 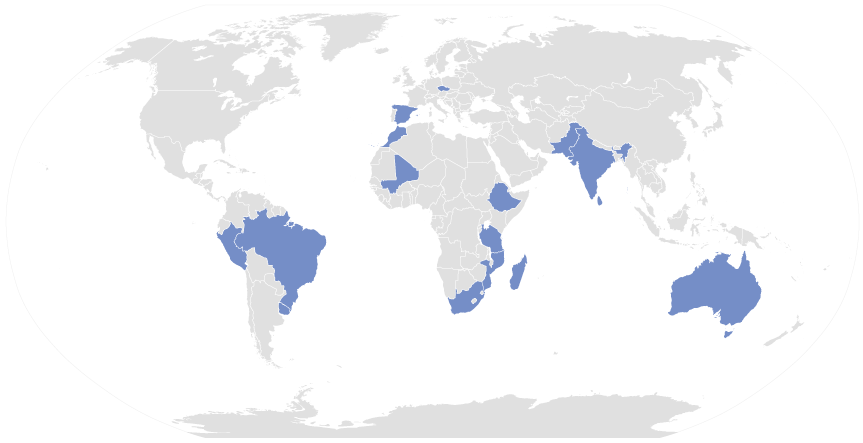 South Africa is renowned for its many gold, diamond and grenat deposits. In 2002, a deposit of Amethystes cactus was discovered in Namibia in the southeast of the country.

There are many fine and precious stones in australia (crystals, sapphires, rubies, emeraude). but the country is especially recognized for its gold and Opalian deposits (cooberpeedy, lightning ridge).

The beretil is especially known for its multiple deposits of Amethyst in the states of the rio grand do sul and bahia. There are also very beautiful specimens of agate and rock crystal in beer.

North of Spain, rivers can be found near Austurias.

The famous welo opal was discovered in 1993 northwest of Ethiopia in the mountains of semienwollo.

India is renowned for its high-quality Aigue-marine deposits. The country also houses specimens of Apophyllites and pentagonites very popular in the Poona region.

Madagascar is a true island with exceptional mineral resources treasures. In addition, there are deposits of Aigues-marines, celestine, septaria, labradorites, blue topazes and tourmaline.

The mali houses superb prehnite specimens on epidote. the best known deposit is the sadiola mine in the region of kayres.

The maroc is home to a wide range of minerals in the colours of the desert, such as Aragonite, baryte, dolomite, Azurite-Malachite, septaria or even crystal and calcedoin geodes.

The garnets from mozambique have enchanting colours.

Nigéria has several deposits of fine and precious stones, including the imperial topaze and the tourmaline.

Pakistan began exporting the peridot in the 1990s when an incredible deposit was discovered at more than 4,000 metres of altitude in the border area of Kashmir. Pakistan is also home to one of the world’s most famous turmaline deposits in the district skardu region.

Cubic and octaeral pyrites are found in the peru, especially in the huaron mine.

Moldovans formed during the impact of a meteorite in Germany 15 million years ago. The melted sand was projected out of the atmosphere and then fell to the east of the Czech Republic in the region of Bohemian and Moravian 450km from the crater.

The "Saphir de ceylan" or "sri lanka sapphire" is the best known sapphire. It is very appreciated for its quality and colours.

Tanzanite was discovered in 1967. One of the most known and productive mines is near Arusha.

With its very pronounced violet and high quality crystals, the Amethyst is the national stone of Uruguay.